Thorium Classic has employed basically the same system for power distribution that its ancestor controls have used for over 30 years. It looks something like this: 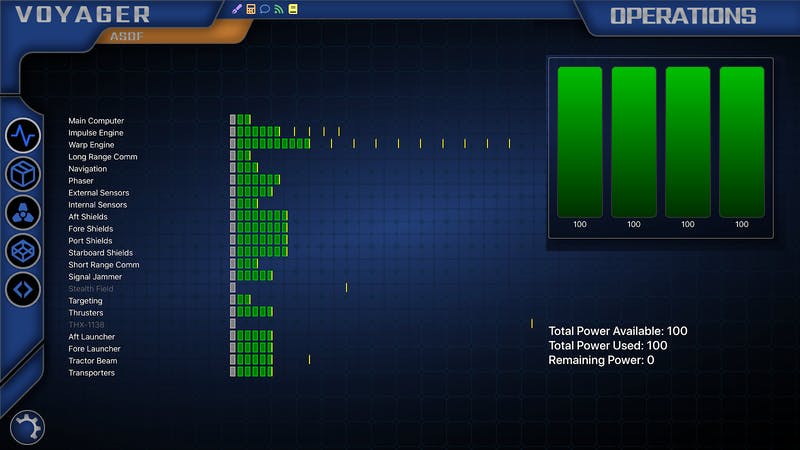 A main reactor (controlled elsewhere) supplies power to the ship systems. Each system can be given a certain number of ‘points’ of power, and the yellow lines represent the amount of power needed for the system to run at a certain level. Batteries can be included in the simulator configuration to supplement the reactor power if the crew decides to use more power than they have available. However, crews are encouraged by the Flight Director to keep their power “balanced” by using the same amount of power that their reactor is producing. This allegedly helps keep the reactor from overheating.

A main reactor (controlled elsewhere) supplies power to the ship systems. Each system can be given a certain number of ‘points’ of power, and the yellow lines represent the amount of power needed for the system to run at a certain level. Batteries can be included in the simulator configuration to supplement the reactor power if the crew decides to use more power than they have available. However, crews are encouraged by the Flight Director to keep their power “balanced” by using the same amount of power that their reactor is producing. This allegedly helps keep the reactor from overheating.

This system has worked fine for literally decades. However, it’s not very realistic, for a number of reasons.

That’s why, for a very long time, I’ve been wanting to overhaul the entire system. What follows is my vision for power distribution.

Power distribution starts with the source of power, the reactors. While Thorium Classic only relied on a single reactor, Thorium Nova will have full support for multiple reactors powering different parts of the ship to support higher redundancy and better configurability.

Reactors will consume fuel, likely deuterium, which will be a limited resource on the ship. Fuel will be converted into power, measured in watts; and heat, which will continually increase as fuel is consumed. The power from the reactors will then be routed by the Power Distribution officer through the power grid.

Reactors will automatically adjust their output to match the load being put on them by the systems they are connected to. Reactors also have a maximum load, which is the most power they can possibly produce at a given moment. The Power Distribution officer can choose to set a limit on the reactor to make sure it doesn’t overload itself. Or, in an emergency, they can override the limit and run the reactor at full-blast.

The reactors will always run at a limited efficiency, with only a portion of the potential energy of the fuel being converted to power. This efficiency will decrease slowly over time, or quickly if the reactor is overloaded. The Maintenance officer will want to keep a close eye on the reactor efficiency and do anything they can to keep it in top-notch shape.

While fuel itself will be consumable, there are plenty of ways to get more of it. Passing merchants will be happy to sell it, and any friendly starbase can give you a top-off. If your ship is in deep space, Ramscoops can collect the ever-present space dust. Of course, this consumes energy, so you want to make sure your collection rate is higher than the power you are expending to get the fuel. It’s best to only collect fuel inside solar systems, near stars or nebulae.

Reactors can be connected straight to systems, but in some cases, powering systems via batteries makes a lot more sense. Batteries store power from the reactors can then be used to supply other ship systems. However, batteries also have a maximum load. They’ll only output a trickle of power compared to what reactors are capable of generating. That means it doesn’t make sense to relay all of your system power through the batteries - you wouldn’t have enough power to run everything.

This makes them best suited for systems with low-power needs, such as life support, communications, and sensors. In a pinch, they could slowly charge the phaser capacitors or run the impulse engines at a low speed for a short while, which makes them ideal for silent-running stealth mode, with all of the engines turned off. You might even be able to maintain warp speed for a while, so long as your Warp Dynamo is already spooled.

To facilitate the transfer of power through the ship, the Power Distribution officer will be able to make connections between the power nodes. These power nodes are the only way to connect power from one place to another - you can’t connect reactors directly to systems - the power has to go through the power grid.

Power nodes are also how you can juice up systems with more power. Each power node can only consume so much power and also has a limited load, though that load is higher than a single reactor’s load, so you can have multiple reactors power a single node. Power nodes distribute their available power to all of their connected systems equally until all systems are satisfied or the power node runs out of juice.

Power nodes can also lose efficiency, which decreases their maximum load; or they can become damaged, which stops the flow of power through them. Fortunately, you’ll have a lot of power nodes at your disposal, so you can quickly reroute power if necessary.

The operation of ship systems will be much more nuanced than in Thorium Nova. For one thing, all systems will come with a built-in efficiency value, which determines how well the system consumes the power that is supplied to it. As I mentioned before, the Maintenance officers on the bridge can improve the efficiency to keep the ship running smoothly.

Systems will also only consume however much power they need at a given moment. Sensors, the Main Computer, and Life Support will all have a continual power draw; Shields, Communications, and Engines will only draw power when they are in use. Shields will also attempt to draw extra power if their integrity is lower than usual, so they can recharge back to 100%.

If a system doesn’t have enough power supplied, it will operate poorly, or not at all. And, if a system is given more power than it needs… Well, we’ll cover that in the next section.

There are two special systems on the power grid. The Warp Dynamo is a giant flywheel that stores kinetic energy to be used in jump-starting the Warp Engines when the crew wants to jump to warp. It requires a steady supply of power to spool, but it has an incredibly high power output when it is engaged.

Phaser capacitors operate on a similar principle, but with a smaller capacity, and thus a smaller output. These capacitors need to be connected directly to the phasers if the crew wants to fire them. However, even disconnected, the Tactical officer can charge and discharge the phasers - they just won’t be able to fire them.

Of course, the Warp Dynamo and Phaser Capacitors are designed to be discharged very quickly, so the bonus that they provide will be limited. But, for the innovative crew, it could mean all the difference.

So, how will the crew operate all of this? I made a rough little diagram. 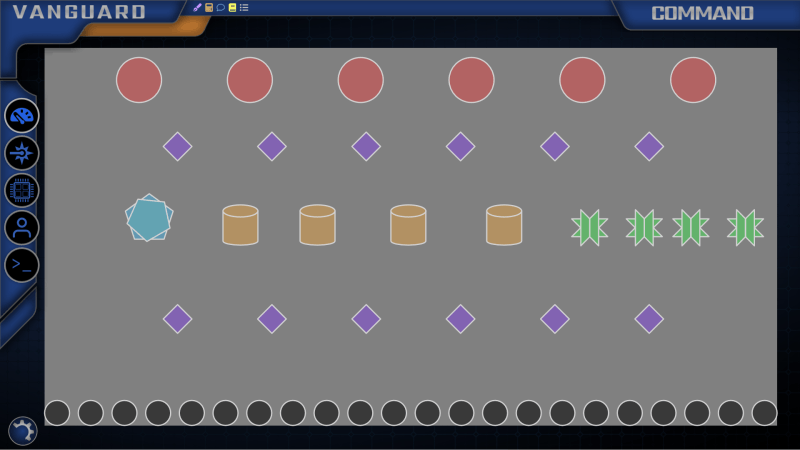 It will work by connecting these nodes together. The reactors are on top, systems (22 of them!) along the bottom. The batteries, Warp Dynamo, and Phaser Capacitors are in the middle. Between them are the square power nodes that connect everything together. Any of these nodes can be clicked and dragged around to rearrange their position on the grid (but their position has no effect on how power is distributed).

The Power Distribution officer can hover their mouse over any of these elements to get information about them, like the power level of the batteries, the heat and fuel availability of the reactors, and the power demand for the systems. Color will be used to indicate systems that aren’t fully powered, or power nodes and reactors that are over or under load.

Clicking on a node will let the crew member connect or disconnect between that node and any of the other nodes. The crew will immediately see the effects of their actions, as the systems respond to changes in the power grid.

Of course, all of this could be significantly simplified for situations with a smaller crew that doesn’t have the time or attention to manually configure the power grid.

And that’s it. Let me know what you think. Is it too complicated? Not complicated enough? What things should be changed, removed, or added? Shoot me an email and let me know, or slide into the Discord server and let’s chat.